The Sistine Chapel of Socialism

BUZLUDZHA, Bulgaria — Like most Bulgarians of her generation, the young architect had little interest in or knowledge of her country’s Communist past. But that changed when, during studies in Germany, she got asked about the “big U.F.O. in Bulgaria.”

She said that she heard there was a “very strange building” atop a mountain somewhere but that she “had no idea what it was.” Her curiosity piqued, she found a photograph of the enormous, weird and, after years of neglect, crumbling concrete tribute to Bulgaria’s defunct Communist Party.

“It was love at first sight,” recalled the architect, Dora Ivanova. “As soon as I saw the picture, I knew I had to do something.”

Ms. Ivanova, 31, ditched her career as a commercial architect and, in the decade since, has poured her energy into saving from ruin one of the world’s strangest structures — a masterpiece of brutalist architecture that, in its Pharaonic dimensions, is both sinister and oddly beautiful.

Perched on a mountain in central Bulgaria, it looks like a grounded flying saucer, flanked by a 230-foot concrete tower that, when it was built, boasted the world’s largest and highest illuminated red star, which stopped shining decades ago.

Nikifor Haralampiev, a conservator from Bulgaria’s National Academy of Art who is working with Ms. Ivanova, described the building as the “Sistine Chapel of socialism.”

Standing in the rubble-strewn main hall beneath a dome adorned with the slogan “workers of the world unite,” he added, “I would not compare the quality of the artwork, but the idea was the same” — the glorification of an all-powerful system of faith.

The building’s original role as a Communist shrine has meant that Ms. Ivanova, the leader of the Buzludzha Project Foundation, has had to not only scramble for money to support her salvage work, but to wrestle with the thorny question of how to deal with an unwanted and, in many ways, deeply ugly past.

What do you do with a building that was built to glorify an oppressive Communist system but, ravaged by rain and snow and stripped bare by thieves, is now a wreck? Should it be torn down in the spirit of reckoning with history — just as the statues of Confederate generals have been toppled in the United States and monuments to Soviet hegemony have been demolished across Ukraine, particularly since Russia invaded in February? 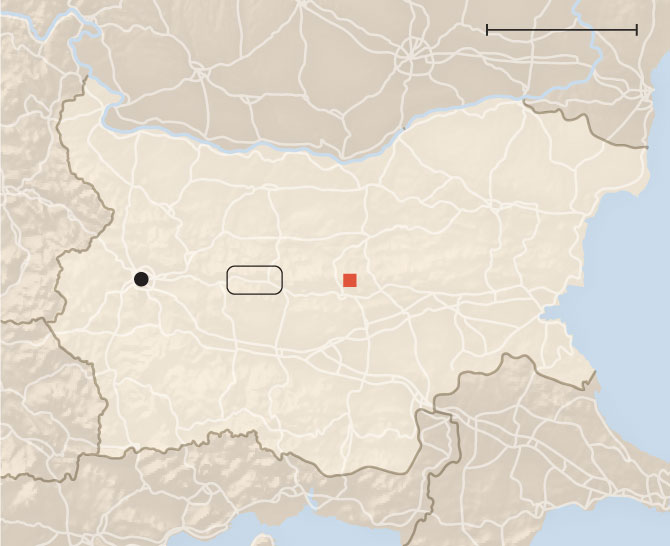 Or should it be restored to its former glory? That is the wish of the building’s now-91-year-old architect, Georgi Stoilov, a lifelong and unrepentant believer in communism. Mr. Stoilov said in an interview at his home in the Bulgarian capital, Sofia, that the building was a reminder of “morally and materially superior times,” and he insisted that “we need to return it to the way it was when I built it.”

That, said Ms. Ivanova, is not going to happen, not least because it would cost too much in a country that ranks as the poorest member of the European Union. The Getty Foundation in Los Angeles, hailing the building as “a masterpiece of architectural engineering,” gave $185,000 in 2019 to fund a “conservation management plan.” It later provided a further $60,000 to help stabilize its collapsing mosaics depicting Communist glory.

But restoring the whole monument would require millions of dollars, and even if there were enough money, Ms. Ivanova said, “our goal is not to restore but to preserve and reuse” it as a venue for meetings, concerts and reflection, as well as a tourist attraction.

Her project, she said, “does not want to glorify the past” by returning to its original state a building that opened in 1981 as the Memorial House of the Bulgarian Communist Party at Buzludzha Peak, a cathedral-like shrine to the gods of Bulgaria’s secular religion — Marx, Engels, Lenin and the Balkan country’s first Communist leader, Georgi Dimitrov.

Ms. Ivanova said she instead wanted to simply stop the rot so that people can visit without being hit on the head by falling masonry and get a sense of a place that “whether you like it or not, it represents a lot about our history.”

She added, “We don’t want a museum freezing everything as it was, but a place for discussion about the past,” a rarity in a country that, blighted by corruption and economic hardship since the collapse of Communism in 1989, has avoided a reckoning with its recent history.

“The idea is to overcome this silence — the shame of talking about what happened,” she said.

Louisa Slavkova, the founder and head of Sofia Platform, a group promoting education about the legacy of Communism, said this silence had left Bulgaria with a hole in its memory. In museums and schools, she said, “the topic we don’t deal with is the history of Communism.”

When she visited schools to tell children about the 1989 collapse of the Berlin Wall, she recalled, “the kids could not tell the Berlin Wall from the Great Wall of China.”

All the same, Ms. Slavkova has doubts about the need to save Buzludzha, worrying that this could “just amplify nostalgia and end up glorifying the past.”

Unlike Poland, the Czech Republic and other former Soviet satellite states in Eastern Europe, Bulgaria never made a clean break from Communism. The party purged its longtime boss, Todor Zhivkov, Bulgaria’s de facto leader from 1954 to 1989, and agreed to free elections in 1990.

But the party, rebranded as the Bulgarian Socialist Party, won those elections and survived as a significant political force, though it is far less popular today. It has long resisted efforts to address Communist-era oppression, focusing instead on the party’s glory years during World War II, when it rallied partisan fighters to resist fascism.

That struggle is celebrated in the mountaintop memorial complex with mosaics commemorating the partisans’ seizure of power in 1944 and the arrival of the Soviet Red Army at the end of the war. Most of the Soviet army mosaic disappeared years ago, apparently stolen by thieves. The partisans are still there, but without eyes — they were gouged out in what Mr. Haralampiev, the conservationist, described as “political vandalism.”

Also vandalized, though this time by the party itself, was a mosaic that originally featured Mr. Zhivkov. His image was hacked out by party officials soon after his purge in late 1989.

The complex, which took more than seven years and 6,000 workers to build, operated for only eight years. Originally the property of the Communist Party, it was nationalized in 1992. The state, all but bankrupt at the time, suspended funding, fired the last staff and left the building to the mercy of bad weather, vandals and thieves who, according to Ms. Ivanova, “stole everything that could be stolen.”

The destruction turned the building into a ghoulish ruin, which made it popular as a backdrop for bands to make dark music videos and a canvas for graffiti artists like Tristan Eaton, who “repaired” several damaged mosaics by painting his own version of Zhivkov and other party leaders. The top of its tower, and the roof of the collapsing main building, also caught on as a venue for so-called deadly selfies.

All of that stopped after Europa Nostra, a heritage organization, listed Buzludzha as one of Europe’s seven “most endangered heritage sites” in 2018 and Bulgarian authorities sent the police to seal off and guard the premises.

More destructive than the thieves, however, has been the weather, which has damaged many mosaics.

Ms. Ivanova and her team have now erected a waterproof cloth screen in the main hall to block the rain and snow that had loosened some of the 2.5 million tessera, small blocks of stone and glass that were used to make the mosaics.

The next task, which will depend on her fund-raising efforts, is to repair the roof originally covered in copper but stripped of that years ago by thieves, who also looted tons of marble, miles of wiring and all of the windows. To help raise some money for the huge job, Ms. Ivanova wants to open the main hall as early as this year to paying visitors, provided their safety can be guaranteed. The building’s exterior is already a tourist attraction, drawing more than 50,000 people last year.

“It is so bold and so brutal. I love this stuff,” said Alex Thompson, a British aerospace engineer and aficionado of “dark tourism” who recently made a pilgrimage up the mountain.

Benjamin Harper, a friend who traveled with him, said it reminded him of the partly destroyed grandstand in Nuremberg, Germany, from which Hitler reviewed Nazi rallies in the 1930s. “This place is hauntingly similar,” he said.

Tearing it down, said Mr. Haralampiev, the conservationist, would delay, not accelerate, a long-stalled reckoning with his country’s past. “You walk around here and you can see and feel the scale of what happened. This is the best way to learn about the regime.”

The smoke and mirrors of unlimited paid time off

How fast are Linux pipes anyway?

When hiring developers, have the candidate read existing code