Van der Waerden’s conjecture mystified mathematicians for 85 years. Its solution shows how polynomial roots relate to one another. 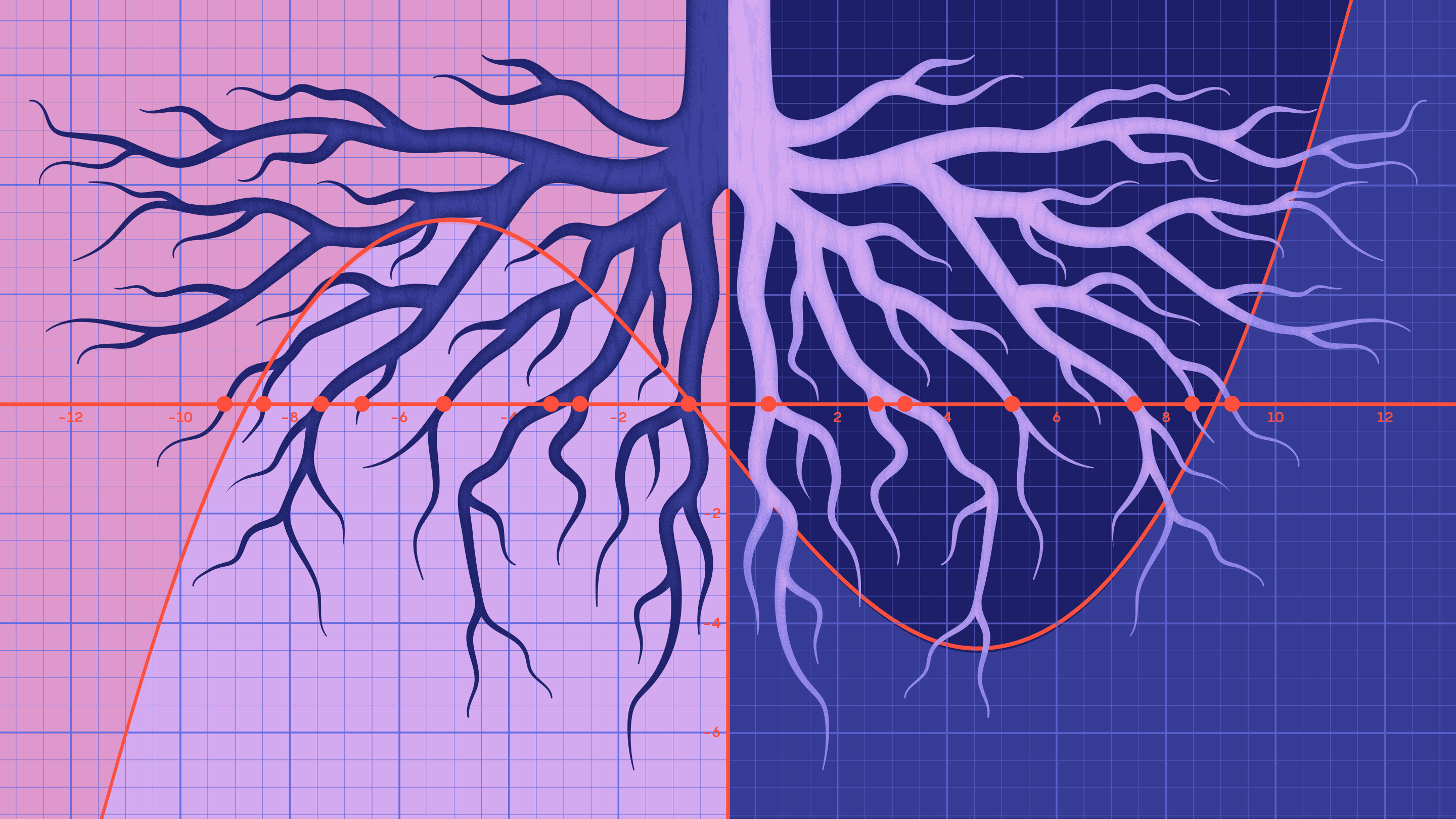 The roots of polynomial equations reveal many of their secrets.

In a recent paper, Manjul Bhargava of Princeton University has settled an 85-year-old conjecture about one of math’s most ancient obsessions: the solutions to polynomial equations such as x2 – 3x + 2=0. “It’s a great problem, famous old question,” said Andrew Granville, a professor at the University of Montreal. “[Bhargava] had an interesting, somewhat different approach, which was very creative.”

To understand polynomials, mathematicians study their roots, the values of x that make the polynomial equal zero. If you plug the number 1 or 2 into x2 – 3x + 2, you’ll get zero, making 1 and 2 the roots of that polynomial.

The equation x2 – 5=0 is a bit trickier. The polynomial can’t be solved using a rational number — a fraction made by dividing two integers. So mathematicians define a new number that solves the equation and call it $latexsqrt{5}$. But all we know about $latexsqrt{5}$ is that its square is 5. Once you have $latexsqrt{5}$, you can easily multiply it by –1 to get a second root: –$latexsqrt{5}$.

These two equations differ in another critical way. The roots of x2 – 5=0 help solve lots of other equations in our mathematical system, like x2 – 20=0. (Note that here, our mathematical system is limited to polynomials and rational numbers.) But if we start using them this way, we’ll find that $latex sqrt{5}$ and –$latexsqrt{5}$ are completely interchangeable. Both $latex 2sqrt{5}$  and –$latex2sqrt{5}$ work equally well as solutions of x2 – 20=0 — and, more generally, in any context. Anywhere $latex sqrt{5}$ is helpful, so is –$latexsqrt{5}$.

This situation is by far the most common scenario. It’s rare to have rational equations with roots that are not interchangeable, as in our first example, where if you start using 2 in your mathematical system in place of 1, nonsense will ensue. “If you switch 1 and 2, then all of arithmetic just kind of dies,” said Frank Thorne, a collaborator of Bhargava’s and a professor at the University of South Carolina.

The van der Waerden conjecture, formulated in 1936 by the Dutch mathematician Bartel Leendert van der Waerden, attempted to quantify how many polynomials have noninterchangeable roots. Progress for decades was steady but slow. But recently that progress accelerated, blown ahead on the broader trade winds advancing number theory as a whole. “Especially more concrete, classical questions in number theory, they really made a comeback in the past 20 years,” said Rainer Dietmann, a professor at Royal Holloway University of London.

For that, some credit Bhargava, who in 2014 received the Fields Medal, widely considered to be math’s highest honor. “Bhargava kicked down a bunch of doors and invited people to go exploring,” said Thorne.

In the summer of 2021, a torrent of new work on the van der Waerden conjecture appeared. Dietmann and his collaborator Sam Chow of the University of Warwick, having already solved a few key cases, posted a new paper making significant headway on June 28. The following week, another team of six shared their own preprint.

In the midst of all this, Bhargava gave an online talk on July 1. In the talk, Bhargava presented a proof of a slightly modified van der Waerden conjecture. “He’d gotten within a hair’s breadth,” said Thorne.

Just two weeks later, in an online presentation during the Mathematical Congress of the Americas, Bhargava shared new work proving van der Waerden’s conjecture in its entirety. He posted his paper online in November.

Van der Waerden was interested in how many polynomials have noninterchangeable roots. But with an infinite number of polynomials, he had to restrict the count somehow.

He started with the polynomial’s degree, the highest power of x that appears in the formula. The polynomial x2 + 1 has degree 2, while x17 – 4 has degree 17. He then looked only at polynomials whose first coefficient is 1. These are called monic polynomials. (By considering only monic polynomials, you eliminate some double-counting: 2x2 – 6x + 4 has exactly the same roots as x2 – 3x + 2.)

Finally, he limited the rest of the coefficients by choosing a positive number called H. He looked only at polynomials whose coefficients are all between –H and H.

The van der Waerden conjecture states that, if you count up the polynomials you’ve chosen — all of the monic, degree-n polynomials with coefficients between –H and H — roughly Hn−1 of them will have noninterchangeable roots. It was this claim that Bhargava verified.

The proof took years of careful reflection before it finally came together. “I’ve been thinking on and off about the question for at least seven or eight years,” Bhargava said. “Anytime some idea came, even about some other problem, I’d think, oh, does it have an application to this one?”

The eventual solution took the full weight of the techniques Bhargava had spent so much time collecting. Instead of counting his pool of polynomials all at once, he split them into three separate groups. Polynomials were assigned to groups based on the discriminant, a number associated with a polynomial’s roots. Bhargava then attacked each group using a different strategy.

“They all come to play. And that’s what made it so exciting for me,” said Bhargava. “These various ideas from different areas came together like a jigsaw puzzle to solve the problem, covering all possible cases just perfectly.”

Though the new paper resolves van der Waerden’s conjecture, there are countless ways forward. “One of the great things with someone like Bhargava is his ingenuity tends to open things up and give other people opportunities to think and develop,” said Granville.

For example, mathematicians could consider what happens when they start with a larger collection of numbers than the rationals. They could also investigate the details underlying van der Waerden’s conjecture: If you can’t interchange the roots in the way you want, how can you interchange them? Are particular patterns especially likely to pop up?

Even if Bhargava’s techniques don’t lead straight to the next number theory breakthrough, Thorne believes the paper will have a more intangible impact. “To read this paper, I think, is to realize that these results are out there to be proved,” he said. “[Bhargava] dared to believe it was possible, and he showed the world that he was right.”

Few-Shot Head Swapping in the Wild

Taking medications during pregnancy is so confusing